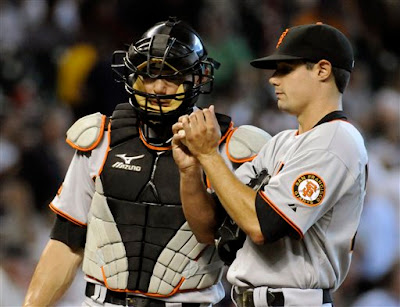 Eli Whiteside (left) and Joe Martinez were unlikely heroes in the Giants' 10-6 win over the Astros. Whiteside hit a grand slam, and Martinez earned the win.
For the first time since September of last year, the Giants came back and won a game when facing a three-run deficit. I don't know if that's a sign of offensive ineptitude this season, our hard luck when playing behind, or just how weird this year has been. Whatever conclusion you want to come to, I'm happy that this streak was finally broken, and I'm even happier with the team that is hitting the field everyday this past week.

As most of you know, I wrote a post this afternoon on why I think Sanchez is going to put us into the playoffs. Then again though, while Sanchez is the catalyst, there just seems something special brewing with this team. When Eli Whiteside hits a grand slam in the top of the sixth inning in a 10-6 win over the Astros at Minute Maid Park, then you know there might be some chips falling the Giants' way. Listen, I know we had a good June, but I have a feeling August could be even better. We finally have stability at second base, and this team as a whole seems to exhibit a rare kind of confidence since the Sanchez trade. They're loose, they're having fun again and they expect to win, which is something I don't think we really had in June (I think we were more pumped to win, but we didn't expect to).

Case in point, the Giants are down 3-0 in the second inning, and the first thought that crosses my mind is "Oh crap, this is where the Giants unravel and they get killed 8-1." However, Martinez pitches great for the next three innings, holding down the fort, and the lineup doesn't go into a shell, but instead explodes and puts this game out of reach for the Astros by the seventh inning. I think Bip Roberts in the post-game commentary said the Giants totaled 40 hits this series. 40 hits! In three freaking games! I don't think we totaled 40 hits in the 10-game road trip we had to start off the second half of the season.

Speaking of Martinez, what a great outing from the kid. In my mind, his start today shows why he is an upgrade over Ryan Sadowski. If that was Sadowski on the hill in the second inning, he would have unraveled in the third, game would have been seven to zip, and the Giants wouldn't have had the mojo to come back. I think the score could be misleading because I think some fans who didn't see the game might say, "Well, Martinez had a big lead. Big woop." However, Martinez never pitched with a lead. In fact, he pitched with the team behind the whole game (the Giants took the lead in the top of the sixth, and he was taken out after the fifth, but because they scored those runs in the top of the sixth, Martinez still got the win). What Martinez did was keep the Giants in the game after the second inning despite the lack of run support (as always) initially. He kept it close, to allow the Giants chip away by each inning before they had the huge outburst. That speaks volumes to how tough a kid Martinez is. Never mind he is already tough for taking that line drive in the head and coming back to pitch on the mound with no fear. This guy is also a gamer on the mound, and should be a solid mainstay in the five-spot until The Big Unit comes back in September.

While the game had an onslaught from a variety of players, the main guy everyone kept an eye on was no other than Pablo Sandoval. After today, Sandoval's average rose to .334, which puts him less than 10 points behind the current Batting Average leader Hanley Ramirez. Now, I don't know if he can pull off the batting crown, but with Sanchez in the lineup, and with Sandoval seeing and swinging at the ball as well as he currently is, it certainly is possible. If everybody thought the whole "Vote for Pablo" All-Star campaign was big, then I can't imagine what the support would be like if he and Ramirez are neck and neck in the last couple of weeks in the season. That would be a flat-out unbelievable feat for Sandoval if he pulls it off: NL Batting Crown at 22 years old. Wow. I get shivers just thinking about it.

Some good signs for Giants fans with the way this team is playing after their ten-game road trip disaster to start off the second half. They took two games in Houston, which didn't look so likely after Cain lost game one of the series. They also not only remain in the thick of it in the Wild Card, but they are keeping within striking distance of the Dodgers.

I know, I should give up hope in catching the Dodgers, but with them coming into town next week, I still believe we can catch them. If things go well Aug. 10-12, the NL West may be one of the most interesting stories in baseball.

Why? Let's just say "1951" will be a heavily-referenced year if the Giants are able to catch the Dodgers.