This year I played softball in a co-ed and male league in intramurals. The thing about intramurals is things can get taken seriously to the point where you have to question why guys are playing softball. Look, I have nothing wrong with being competitive, but when you're complaining to the umpire about calls and getting overly mad at girls who have (and openly acknowledge) no athletic skills and looking to take pitches because you're just looking to get on "base", well...you really need to re-examine why you're playing softball in the first place. This is slow pitch softball for chrissakes! Nobody is Evan Longoria or Jennie Finch here. Nobody needs to show how good they used to be in high school or play as if its Red Sox-Yankees 2009. Have fun and just enjoy the game because if you think about it, the whole aspect of slow pitch softball is pretty comical. People hitting a slow, looping, big ball. Doesn't sound competitive, does it? So why should we make it more competitive than it needs to be. Grab a chew, do some chatter, have a few beers after the game and just swing as hard as you can at anything close to the strike zone.

Most of what I feel about softball echoes what Jim Rome said with this rant on that subject from his radio show. Basically, he calls out all those uber-competitive softball guys who think they're Derek Jeter but in softball. Great, funny rant that is worth hearing a couple times over, especially if you have played softball.


Overall, I'm not the hugest fan of Jim Rome, especially his show "Rome is Burning." I think the show's structure is lame and it being contained in a thirty minute time frame and with guests prevents Rome from doing what he does best: ripping guys to shreads. Really, that's the only reason you watch or listen to Rome, to see who he royally takes it out on and how bad it gets. Yet the shows structure does it in a way that it doesn't at all seem too genuine on a consistent basis and he's just being Rome because he has to be, not because he wants to be.
Posted by Kevin O'Brien at 9:23 AM 5 comments: 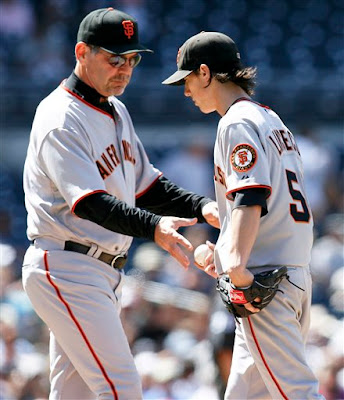 How Will the Giants Do This Year?

Myspace polls
Posted by Kevin O'Brien at 6:51 PM No comments: Tim Lincecum will be the main man for the Giants this season from the get-go.

I love the season previews. I buy them. I read them. I can't get enough of them. Even as a newspaper editor for the school paper, I take a certain joy in making previews, even if it may not be for a sport that's worth it. (e.g. college soccer).

I was tempted with the thought of doing a full-length division by division AL and NL preview, and I still may do it, but I decided to center on the Giants because in all reality, all I really care about is the Giants. I've been following the Giants since January, when there was the slight possibility that they might have gotten Manny Ramirez. Unfortunately, because of Brian Sabean's tendency to make bonehead signings, we lost out to the rival Dodgers who basically did everything in the world to basically lose their guy but because of the economy and because Manny burned bridges in Boston so badly, they were able to get him back. I absolutely hate Manny now, and I hate Sabean even more because we could have automatically went from fringe contender in the weak NL West to bonafide favorite if we had Manny. But since he's a Dodger now, I have nothing but scorn for the guy.

All right, enough of the anti-Manny, Dodger, Sabean talk. They'll be plenty room for that. Let's get onto the preview.

The Giants last season, in all honesty, overachieved, despite how crappy a 72-90 record looks on paper. I thought the team was going to be terrible, everybody thought the team was going to be terrible. Heck, people thought last season the Giants were going to compete with the 1962 Mets for the worst record in baseball and I wasn't exactly ruling that out. For years we had put everything behind Barry Bonds and then in an asinine move we decided not to go that route anymore even though the Giants had in no way shape or form prepared for such a maneuver. However, the Giants got big performance from their pitching staff, specifically Tim Lincecum who won 18 games and led the league in strikeouts en route to the Cy Young award (which I am glad he won because I would've been furious if C.C. Sabathia won it despite playing only half a season in the NL). Furthermore, the Giants finally found their closer in Brian Wilson after a six year odyssey of mediocrity that spanned from Matt Herges to Armando Benitez. Wilson saved 41 games and was named to the All-Star team.
Offensively, the Giants were not great, but they got good years from Bengie Molina, whose position in the cleanup spot produced career years in RBIs, Fred Lewis, who showed he was not just a month-long phenom, and even Emmanuel Burriss, who made Giants scratch their heads why they were going with Brian Bocock for so long.

Big things are expected out of Pablo Sandoval after he hit .345 in a 45 game stint.

Hopefully Matt Cain will get the kind of run support that can result in a decent record this season.
Management:

This season hinges on two players: Lincecum and Sandoval. If both those guys produce, the Giants not only could be in good shape this season, but for seasons to come. A lot of the Giants veterans are good, but they are no way prepared to take a team on their back. Renteria has thrived in supporting roles, Molina is a quiet leader that shies from spotlight and Aaron Rowand showed that he just doesn't have the statistical fortitude to be the "man". Sandoval though can be a solid offensive guy that could have an impact on a team like Prince Fielder. Then again though, he could also be the next Randall Simon. As for Lincecum, he's obviously a proven commodity, but can he do it again? Is he the next Josh Beckett or next Mark Fidrych? The season hinges on how those two guys do and it could be a rough year if they don't live up to the hype. However, in a weak NL West where it is the Dodgers and everyone else, an LA slip and surprising performances from the Giants supporting cast could produce a competitive season that could result in the Giants slipping by LA for the NL West crown.