Baseball is a dirty game...and it doesn't matter 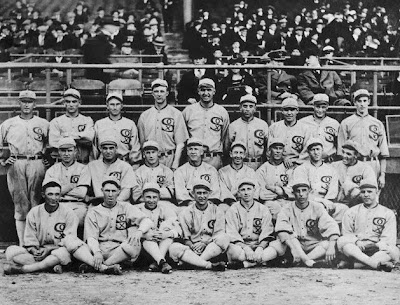 Before steroids and HGH, there were fixed games by gamblers and the 1919 Black Sox, further proof that there is no "pure" era in baseball

Whenever I overhear people talk about baseball, the one common thread most conversations have is the fact that the game is corrupt. After all, instead of talking about future hall of famers these days, we're instead talking about which ones are on the juice. And while I agree that steroids (and now HGH) have tainted the game somewhat, I have to play devil's advocate somewhat whenever I overhear this sentence:

Why? Because since its inception, baseball is and maybe will always be a dirty game, and only the true baseball fan accepts this.

Don't believe me? Go way back. Before there was steroids, the main thorn in baseball's side was another vice: gambling. It all started with 1919 Black Sox and only got worse once they made Kennesaw Mountain Landis the commissioner who dealt with problems in ways Bud Selig could never have dreamed of (just imagine Bill the Butcher from Gangs of New York and you got Landis, a former WWI veteran). In addition to the eight Chicago players banned for life because of fixing the world series, eight other baseball figures were banned from baseball as well due to gambling related instances. And we're talking banned here. No 25 games suspensions, just "you won't play MLB baseball again, period".

Years later, gambling surfaced its ugly head again (this time with Pete Rose, as everyone knows), but another problem surfaced with baseball that further tainted the game: the player's strike. Because player's and owner's weren't able to come to an agreement over money, the end of the season was canceled, no playoffs were played, and no champion was crowned. It was like watching Rocky without seeing the final fight because the projector in the movie theater broke down and it was the last night the movie was playing. You felt robbed and your heart ripped out from inside. Thus, instead of being corrupt gamblers, baseball players and other figures were now labeled as greedy, money-hungry socialites. They didn't care about fans, they didn't care about the love for the game. All players cared about was getting their checks, and all owners cared about was cutting the cost of the checks they were writing, all of this at the fan's and game's expense.

I could go into other stories of cheating (and believe me, baseball's got plenty of them), but I won't. By now, I know you are asking and saying, "What's the point? So, baseball has roots to corruption. I should hate the game even more, the casual baseball fan claims".

But here's the catch. What the true baseball fan knows and realizes, that almost on a timely basis, that with every period of corruption, everything is validated by one great moment or series of moments. Something so great happens that it brings all the fans back into the ballpark and once again validates that baseball is a beautiful game. After the black sox happened, a player named Babe Ruth came into the game and brought fans to the park with his larger than life personality and hitting prowess that smashed every record conceivable during that era. After the strike, two players named Sammy Sosa and Mark McGuire competed in the most heated home run race of all time and made the game of summer once again gleam in the hearts of baseball fans everywhere and made them forget about player's and owner's greed. For a short time, they rejuvenated the game and once again made baseball a great game.

So you see...that is what the true baseball fans knows that the casual one may never understand. Sure, baseball may be corrupt. Maybe, baseball and corruption will forever go side and side as long as the game continues. But, just you remember, that while this steroids scandal may dominate the media, and while casual fans will slowly grow disenchanted with the game, something will come and make baseball fun and beautiful again.

Because the true baseball fan knows it's like clockwork.
Posted by Kevin O'Brien at 11:22 PM No comments: