The PG Beat: Bullpen, defense collapse; Giants give gift to the Reds. 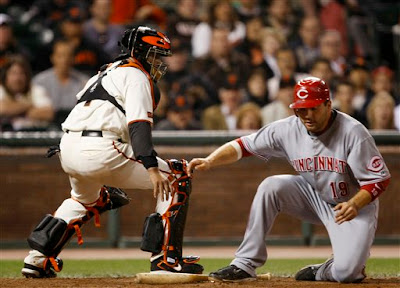 Joey Votto (right) scores as Bengie Molina looks for an errant throw by Pablo Sandoval. At this point, it goes without saying that Giants' chances of winning this game were lost.

Yet when it came to two categories that really mattered, the Reds clearly outmatched them: errors and the final score.

It's tough to describe how agonizing that game was tonight. In no way, shape, or form did the Reds deserve to win that game. We outhit them, and even though Lincecum didn't have his best stuff tonight, he certainly was better on the hill than Bailey. Yet two things that have been our strong points this year (defense and the bullpen) totally laid ducks tonight. I mean, five errors! Are you freaking kidding me? What an absolute joke. I seriously wish now Travis Ishikawa could solve whatever hitting funk he is in, mainly because Garko is a sub par glove at first base to put it kindly. Furthermore, Renteria is becoming more and more exposed without Ishikawa bailing him out on his consistently errant throws. Seriously, whatever you have to do to hit the ball Ishi, do it! We need your freaking glove out there!

Now, I normally don't like to blame Bochy or the managers for losses, but I'm seriously angry over this blunder: why the hell do you take out Jeremey Affeldt for Sergio Romo? Why are managers so enamored with this righty-lefty thing? And seriously, why did Bochy pull the trigger on Affeldt so fast? He only faced one freaking batter, and do you seriously think Romo is going to shut the door on the four-six holes any better than Affeldt? Man, I just can't understand Bochy's reasoning. I understand Affeldt's control is off, I understand he walked the leadoff hitter, and I understand most of the lineup was right-handed, but why would you put in Affeldt to just face one batter? He's your best reliever Bochy! Come on. Even the bleacher bums in left field knew that decision was idiotic.

To look at this positively, all I can say is the Giants offense looks great. Sans a dumb baserunning error by Fred Lewis, I really thought the Giants lineup came to play today at the plate. They had a lot of good at-bats, Eugenio Velez continues to be a great leadoff guy, and Pablo continues to be Pablo at the dish. Basically, these kind of games are going to happen. You're best pitcher isn't going to have his best stuff, the defense is going to fail you every now and then, your bullpen is going to self-destruct. It happens. The good thing? The offense doesn't seem to be letting up, and I think that bodes well into tomorrow. Sure, this loss was soul-crushing, but the Reds and the Giants knew that Baker's boys got really damn lucky in this game. They know they will be hardpressed to pull off another victory like this.

Even though a sweep would have been nice, we still can take this series. I was not impressed at all with the Reds. They got out-of-the butt performances from an over-the-hill, "How is he still playing" Alex Gonzalez, and a "Seriously he sucks, because I saw him suck on a daily basis in Seattle" Wladimir Balentein, both guys hitting under .200 going into the game. Votto did relatively nothing at the dish, and Phillips had some good hits, but got some lucky sprays as well. This was just a bad-break game. It happens, you move on, as hard as it is.

As long as the offense continues its ways, I think we will be fine and this game should not drive San Francisco fans into panic mode. We did what we could offensively tonight, only we didn't do the other things to win. Hopefully the boys understand that, and are able to put a complete game together on both offense and defense, and not just at the plate tomorrow and Sunday.